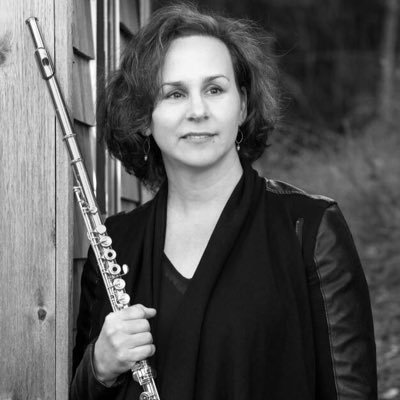 David Vining, Owner of Mountain Peak Music, published The Breathing Book for Tenor Trombone and versions for euphonium, bass trombone, trumpet and tuba in 2009. The origin of the series came as the result of his recovery from dystonia (https://davidvining.com/embouchure-help-2/embouchure-help/) and wanting to set the record straight where brass breathing pedagogy was concerned. He felt like some of his playing problems were (in part) the result of breathing misunderstandings. Other instrument versions followed:  David Nesmith – horn (2011), Stephen Caplan – oboe (2014), Amy Likar – flute (2019) and Bonnie Draina – singers (2019). The series is a best seller, having sold over 3,000 copies to date.  All are available at Mountain Peak Music and through other sellers.

Read my interview with Amy Likar about things related to breathing, below.

KW:  What qualifications do have you that allow you to be a breathing authority?

AL:  I have a DMA (1999) in Flute Performance from The Ohio State University, studying with Katherine Borst Jones. In addition, I’ve done extra flute study with Peter Lloyd, Tim Day and Randall Hester.  My undergraduate study was with Martha Aarons.

I’ve studied Alexander Technique myself for 27 years now and have been a trained Alexander Technique teacher since 2002. I’m also the Director of Training for the Association of Body Mapping Education. I trained to teach the “What Every Musician Needs to Know about the Body®” course in 1998.

I studied the facilitation of breathing—the breathing process—for 3 years with Don Zuckerman. I’ve also done additional breathing coordination work with Pamela Blanc and Jessica Wolf.  All are Alexander Technique teachers.  I’ve taught summer Alexander Technique workshops at the University of Colorado at Boulder for several years with James Brody and Ed Bilanchone and learned a lot from both of them.

Why is there so much misinformation about breathing in the flute world?

We pass down information from teacher to teacher, and much of what was written in the articles and books written by flute players was not always accurate anatomically. Also, often what happens is the teacher wants to give the student a quick fix in a moment in time. While that quick fix may work in that moment, it’s not applicable to all situations and all music being played. So a simple idea about “support” ends up translating into overwork of the abdominal muscles, which ends up tightening the throat and leading to a multitude of other problems.

How do you recommend that teachers use this book with students?

The different explorations throughout the book have come from explorations I’ve done with myself and have done with all of my flute students. I would say it would be fun to explore the ideas together.

A student gets your book and is working through it with great success and discovers that much of the breathing information that is coming from the current studio teacher does not agree.  What suggestions do you have for the student?

There are a couple of choices here. If you think the teacher is open, share the information you are reading with the teacher and say that it’s working. If the teacher doesn’t seem open to the ideas, then just work on your own and translate what the teacher is saying into what works for you. Just because teachers aren’t open to anatomical reality doesn’t mean that you can’t learn good musicianship from them, you just need to translate what they are saying into what makes sense for your body. Most of the teachers I encounter these days are pretty open to these ideas.

KW:  What is the single most important thing to understand about breathing?

We need breath to live.

KW:  What was the biggest challenge in writing this book?

The biggest challenge was feeling like I had it figured out enough myself that I could actually share it on paper.

What are the top three breathing issues that you encounter regularly in your work with students?

What type of daily practice do you have that’s dedicated to breathing?

What would you suggest to teach about breathing to “Baby Flutelets,” right in their first lesson? How would you do so?

I like using dowel rods with young flute players and letting them drop them while figuring out easy arms and hand position.  With young flutists, a lot of the arm tension comes because they don’t want to drop the flute. You can drop a dowel without consequence while you are figuring out what appropriate effort is. I also have them spend a lot of time on just the head joint, and specifically getting them playing really long tones on just the head joint. Arms can be easy and ribs can be moving if they are only concerned with getting a sound out of the head joint by itself.

Where can flutists acquire a copy of your book?

Amy Likar, M.AmSAT, DMA, Licensed Andover Educator is a San Francisco Bay Area based performing and teaching artist. Equally at home in an orchestra, as a chamber musician or as a soloist, Amy is also a passionate and committed teacher of all ages. As member of the Oakland Symphony, she is committed to the symphony’s mission of classical music for all and mentors for their Music for Excellence Program. She is adjunct flute faculty at St. Mary’s College of California.  For over twenty years she has been an innovator and educator for musicians’ and artists’ wellness as a teacher of Body Mapping and the Alexander Technique. She received her Alexander Training at the Alexander Training Institute of San Francisco in 2002. She has a DMA from The Ohio State University in Flute Performance. She is the Director of Training for Andover Educators, teaching musicians and music educators to teach the Body Mapping Course “What Every Musician Needs to Know about the Body”®. Amy has been a soloist, and guest teaching artist at many colleges and universities throughout the United States and Europe and a frequent performer and presenter at conferences and conventions throughout the world. She is the editor and narrator for the DVD Move Well, Avoid Injury and the author of the recently released Breathing Book for Flute. Visit www.amylikar.com for more information. Amy Likar has been a Powell player for 25 years and is pleased to be a Powell Performing Artist.