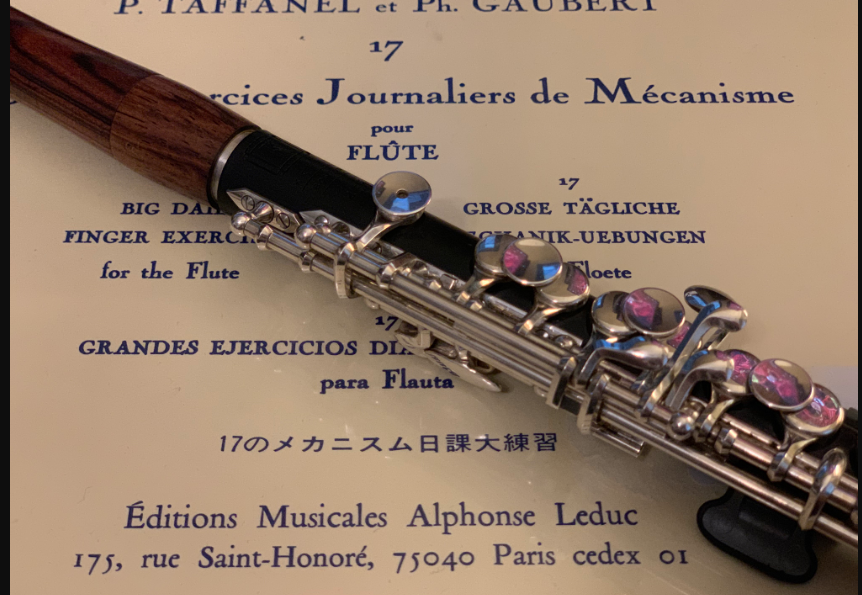 I wish that I could offer some wizard-style, wand-waving magic that could make all notes on the piccolo be perfectly in tune and effortless. Unfortunately, that is just something that only occurs in the movies. In reality, piccolo players need to be fearless but flexible and often times need to stand their ground while also bending over backwards at the drop of a hat, or baton. This makes the job of the piccolo player both challenging and rewarding, yet amazingly terrifying. Here are a few pointers that I hope may help some of you.

Keep in mind that there are many different makes of piccolo, of varying ages, out in the world today. To paraphrase a good friend, each of those piccolos was once a tree and we are asking it to now be a piccolo. Every piece of wood is different, causing minor differences from one instrument to another. Approach every piccolo with an open mind, as if it were a unique individual. Also, just because an instrument was made by a reputable and recognizable maker does not mean that the instrument has been well maintained over the years, which can create an endless nightmare of problems with intonation.

First, know your instrument. Know that it is in good working order and know what your pitch tendencies are on that instrument.

This can be done easily enough by using the Taffanel and Gaubert 17 Big Daily Studies, exercises #10 and #11. Never underestimate the benefit of the basics. I recommend playing through these slowly with a drone on the tonic of each arpeggio. Play through the exercises slowly, stopping on the tonic each time and in each octave to listen and adjust pitch in relationship to the tonic drone. This should be done daily and cycled, focusing on one or two tonics per day. After one cycle is done on the tonic, then repeat the cycle stopping on the fifth. Repeat the cycle once again, this time stopping on the third. During each of these cycles, continue using the drone on the tonic. Focus on the tonic and the fifth as these intervals are perfect and remain constant within harmonic structures. I recommend cycling through C and C# on day one, D and Eb on day two, and so on. This intonation and ear training exercise can be done in less than ten minutes per day, but the benefits will last much longer. If only the first octave is used initially, then this exercise is also a really nice warm-up. I am all about multitasking!

While tuners are wonderful contraptions, they are far more sensitive than most people’s ears. They also do not take into account the need for flexibility, especially in extreme octaves, specifically the higher end of the piccolo. On my own primary piccolo, my high Bb is perfectly in tune, however, I often need to sharpen the note in order to be in tune within the ensemble. I know that I am playing sharp, but by playing “out of tune” I am remaining flexible for the benefit of the ensemble. If you think in terms of the piano, the lowest notes are a little flat and the highest are a little sharp. This stretch tuning allows for the most balanced tuning in a chord and it is how we perceive pitch in the modern era.

Speaking of tuners, we all know that they can ruin our day, but they are still important. It is possible to do the above exercise with a tuner as well, stopping on the tonic and fifth. Whatever you do, don’t stop on every tonic and fifth, or you WILL go insane. Instead, play the exercise a few measures or patterns at a time, facing away from the tuner. Every third measure, stop on the chosen note and check your pitch. I tend to shift the exercise to the tuner when I focus on the third of the arpeggios since they can vary quite a bit. Also, when I know a particular note is troublesome for me, I will play the above exercise, as well as scales, specifically to help anchor the naughty note. For an extra ounce of prevention, I will occasionally practice my troublesome notes in a long-tone exercise, holding the note as steady and unwavering for as long as I can while glaring at the judgmental tuning device. This helps to build pitch stability and endurance, but after a bit, it too can drive one to the edge.

Once those individual pitch issues have been identified and the work has been put in to correct them, I recommend experimenting with alternative fingerings. It is important to know the instrument before attempting to implement alternative fingerings as not all fingerings work on all piccolos. There are benefits of learning and using different fingerings besides pitch. In some cases, some of these other fingerings can make a very difficult passage much easier. They also give options for tonal color and ease of response. Explore and take notes!

Finally, in that moment during a rehearsal or performance, after you have put in many hours of work getting your intonation perfectly locked in, you may find that something just isn’t working. Keep in mind, you only have control over your own playing. The piccolo lives in the uppermost tip of the intonation pyramid, so any pitch discrepancies in the lower voices can wreak havoc on all of our hard work. It is at this point that we just have to be fearless, play the part to the best of our ability, and have faith in our colleagues. Often, what may seem like a crash and burn scenario ends up only being a minor infraction. There is no substitute for focused practice. In the end, so many variables are out of our control that we need to commit to making beautiful music, perfect or not!