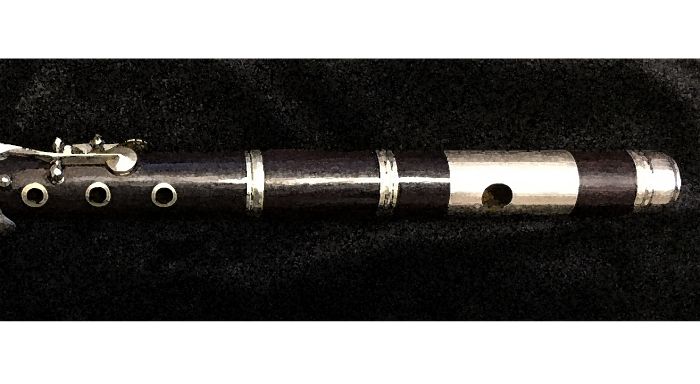 Those of us who frequent flea markets and eBay hope that one day we will get the deal of a lifetime. That one item that turns out to be too good to be true, a diamond in the rough, seems to elude us. Finding a five-dollar purchase that turns out to be worth hundreds or even thousands of dollars is always a remote possibility, but it is usually more of a gamble. Vintage piccolos are no different. Their obscurity makes them a fun collectible and something of a show-and-tell must-have for most piccolo players. First, knowing your motivation and end goal is important.  Are you collecting for personal enjoyment or are you hoping to play and perform on the instruments?  Second, knowing the historical background of the piccolo is also important for anyone who wants to begin collecting. This way you know what you are getting and know the resources to identify the instruments. The history of the piccolo is not as easily traced as the history of the flute and there are some rather vague points on the timeline. The piccolo has many forms of key work (one-key, four-key, six-key, eight-key, ring system, Böehm, reform) and several transposition sizes (Ab, Eb, Bb, Db, F, C), to give an oversimplified list.  Here is a brief timeline for the piccolo and its various forms—keep in mind that there is a great deal of overlap in design.

The fife developed during the Middle Ages and was a military instrument with origins in Switzerland. It has a small, cylindrical bore and no keys. The lack of keys requires cross-fingerings to produce chromatic pitches. Its shrill and piercing tone made it ideal for use in calling troop movements on the battlefield. Although the fife was not suited for the concert hall, it is still frequently included in modern military ceremonies around the world.

The one-keyed piccolo had the same range and pitch as the fife.  The separation of fife and piccolo began with the addition of a key and changes to the bore. Although there are one-keyed fifes, it is the combination of changes that delineate the instruments. Eighteenth century texts mention the development of a one-keyed piccolo with better intonation as a fife alternative. The French were the first to develop the one-keyed piccolo, although there is debate over which maker first introduced the concept. The one-keyed piccolo appeared in Germany around 1750, but not in England until around 1800. Early piccolos were generally made of boxwood, although other materials were used less frequently. Piccolos were made in three or four parts and had three corps de réchange, unlike their Baroque flute counterparts that often had as many as seven corps.

Boxwood was less preferred on multi-keyed instruments due to the weak points the additional key work created in the body, which increased the likelihood of cracking. Hardwoods like grenadilla and cocus provided more stability. The standard shape for multi-keyed instruments moved from three or four pieces to just two (head and body with a tuning barrel). The key work was often made of silver. These additional keys eliminated the need for cross-fingerings and provided better intonation. Many companies produced several forms of simple-system piccolos even into the mid-1900s.

The Böehm-system piccolo met with resistance initially. Many players did not want to learn the new fingerings required for the instrument. The popularity of the multi-keyed systems and high cost of the newer system also hindered the acceptance of the Böehm-system. This resistance to the new system inspired the development of alternate, or reform systems. Eventually, players desired piccolos that had more stable intonation, with mechanisms that matched the mechanisms of their flutes.

In the twenty-first century, we are lucky enough to have makers who are still pursuing design and innovation. Leonard Lopatin has designed instruments with square tone holes which creates a straight edge for venting. Eva Kingma has created a line of open-hole, quarter-tone instruments. Jim Keefe has added a C# trill key, once again allowing the piccolo mechanism to match that of the flute. Eldred Spell, Tobias Mancke, and Adam Pettry are on the cutting edge of head joint design (pun intended).

So, you may be wondering why this information is important for vintage instruments? Take note of the date ranges for each category. They overlap a great deal and many different systems were in production and in use throughout the timeline. Simple-system piccolos were produced until the early twentieth century and are still available from a limited number of professional makers. Many of the instruments that are frequently seen on sites like eBay, or found in your grandparents’ attic, were made around 1900 and sold for around $2.00 through companies like Sears & Roebuck as instruments for hobbyists. Higher quality instruments are quite rare but they are out there. Many require restorations that may be costly. Frequently, money must be spent to get the instrument into playing condition before you may even know if the instrument is worth restoring.  It is a gamble! For the collector, this is part of the fun and a labor of love.  We know what we are looking for and what is may cost us and we are willing to take the risk. The process can be very rewarding and addictive!