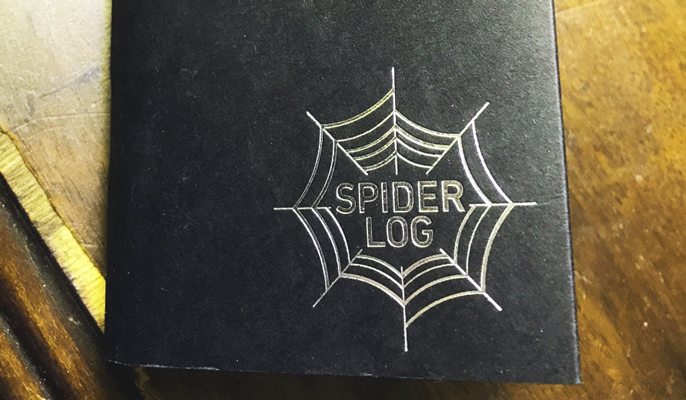 I have logged my flute studies since 1993, when I stared traveling to take private lessons and participate in music festivals. After each journey, I would write down new things I learned or update my practice to-do lists. Early on I noticed that the greatest function of that log was to serve as a stimulus for a stable practice routine and as a reference to material learned during lessons, festivals and master classes. I used various note formats, such as notebooks, calendars, and personal electronic devices. The only consistencies were portability and impersonality.

I went through dozens of formats and ways of writing down my studies and did not pay much attention to this process until I started teaching full time and wanted to instill this habit in my students. Since then, I have been creating practice lists for my students, varying them according to the students’ individual needs and goals. A major change occurred in 2014, when I had the opportunity to guide my graduate student Alexis Finet in researching topics related to flute pedagogy. During that semester, Alexis and I had many conversations about flute learning, practicing, memorizing, and personal motivation. We also conducted a couple of experiments on practice routines with my other students in the flute studio. The creation of the SPIDER LOG as an interleaved practice system with a graphic feedback of progress evolved from the experiments during that period.

Before I explain how the Spider Log works, it is important to relate a couple of experiments on practice routines I conducted with my students. These experiments led me to discover an improved way of practicing and managing practice time.

The first experiment occurred when I modified some requirements in the individualized practice routine that I had been assigning to myself and my students. Each one of us continued to do their usual set of studies and repertoire, but each item to study in this set had a short and predetermined time limit. That is, we all continued to do exercises in sonority, fingering technique, scales, arpeggios, musical studies, and repertoire, but this time with a specific time for each activity. The objective of this experiment was to test the possibility of interleaving several prescribed exercises, but limiting the practice time for each area of study. For two weeks I noted the changes in my students’ practice as well as their comments. I observed that concise activities did not change, but long exercises were either modified or neglected. Many students saw this change in planning as authoritarian and inflexible.

Some students noted that important discoveries during practice, like the discovery of a better sound control, could not be properly explored in the short-allocated times.

With those responses in consideration, I created a second experiment. This time I created a table with various possibilities of sound and technical studies, as well as ample space for repertoire practice. All that needed to be recorded in this table would be the day, the chosen activity, and the time practiced. My intention was to obtain a graphic vision of the practice choices of each student. I noticed after a week that this system caused a strong negative reaction. I gathered my students to share our observations and concluded that the table, because it was too extensive, created a feeling of failure. Students commented that this table was a very dry way of representing or stimulating musical study. We also observed that, although the table had many possibilities, the number of activities practiced at any cyclical period (i.e.: a practice day) constantly remained below a dozen.

From the experiments cited above, I learned two important factors that led to the creation of the Spider Log: (1) musical practice requires flexibility on time management, and (2) visual representation of one’s own efforts while practicing could lead to strong reactions. The combination of these two somewhat unrelated factors came through the addition of a third element: our natural desire for balance and symmetry. The idea to add this third element came about when I tried to reconcile Alexis’ suggestion to eliminate any time requirements with my desire to have an instant representation of effort. After some design attempts it became clear that the symmetrical simplicity of a spider’s web, based on four intersected lines, would be the ideal solution. This drawing was simple and symmetrical. It also generated eight graphical fields, enough space to represent a practice routine or a personal project.

Design improvements and drawings of this worksheet took place throughout the year 2015. During this period, I collected suggestions from dozens of students from my flute studio and the music festivals where I teach. My main goal was to create an elegant spreadsheet, where the interleaving process would be encouraged with visual feedback. Here, I list four steps that explain the use of SPIDER LOG and its fundamentals. In the first step, you should create a specific project. Success in this initial step will facilitate the creation of clear and congruent activities. The creation of a defined project could vary from developing technique to learning a piece. I have noticed that clear and pragmatic projects have a high degree of success in both information learning and completion. Although my observations are based on my own practice routines, research in the field of general education show that contextualized learning in realistic situations has a high degree of retention (Brown, Collins & Duguid, 1989).

In the second step, one must create a list of eight activities congruent to the chosen project, and number the corresponding fields on the chart. Although there is no allocated time for each activity, all of them are necessary for creating a symmetric web. Therefore, all activities shall receive periodic attention. The visual feedback and quest for symmetry will generate an eventual temporal control on all activities practiced. The specific number of eight activities focused around a project is a result of the well-established research on memory retention and attention span and my desire to have a symmetrical representation of progress. According to an important study of attention and memory capacity performed by George Miller, humans can maintain an average of seven objects in their attention, either in the form of data to be memorized or activities to be followed (Miller, 1956). I observed this phenomenon when I allowed my students to practice as many studies as they wanted during the second experiment described above, and no one went beyond ten studies. There is also no need to number the Spider Log chart in any specific order. The only relevant aspect is that all activities have their own field and that all of them participate in the interleaved practice. Many studies on learning and memorization, such as those influenced by Robert A. Bjork, note that an important part of learning occurs when we create a varied interleaving space in between activities (Kornell, Castel, Erch, and Bjork, 2010) and (Birnbaum, Kornell, E. Bjork and R. Bjork, 2012). The spacing of activities around this circular graph, with no specific order, helps to create variation in the practice of each activity. The goal is to keep visiting all activities periodically.

Interleaved practice will finally be achieved in the third step. At this point activities will be chosen, executed, and switched over to keep a rotation. This rotation creates the opportunity to make the practitioner forget and remember each activity every time he stops and restart it after being done with some other one. As it has been researched, forgetting and remembering increases the level of assimilation through successive spaced repetitions rather than successive blocked repetitions (Kornell, Castel, Erch, and Bjork, 2010). I noticed that the amount of time devoted to each activity as well as the order of execution are very flexible. The relevant factor is the interweaving of all activities. The maintenance of a relatively proportional time dedicated to each activity will be achieved by the quest for a graphical symmetry. As progress happens, the initial list of activities might need to be adjusted. I find this adjustment quite healthy because it keeps the practice alive and progress constant. When any activity is neglected, the graph will become asymmetrical. At that point, we must revisit the validity and duration of the activity neglected as well as of any other activity that might be taking up a disproportionate amount of time. We should also consider how the neglected activity fits in the scope of the project. The graphical asymmetry causes an important dialogue between the process of interleaved practice and the definition of parameters for each activity. This dynamic learning process causes a constant communication between planning and time management.

The fourth and final step happens when we keep a symmetrical chart through several cycles of interleaved practice. At that point, we should have produced a symmetrical spider web, representing dozens of practice sessions. This web also represents dozens of time management decisions as well as goal adjustments. Although the initial goal might have not been achieved in its entirety, the completion of a symmetric chart represents solid progress, that must be recognized and appreciated. For that step, I provided a set of spider stickers, one of which is to be glued to the completed web.

This symbolic reward is just an incentive to create another successful project. I have noticed its positive effect with myself and with many of my students.

Conclusion
The elaboration of this study routine is the result of a process where I learned to practice in an efficient and stimulating way. I have taken great pleasure in exploring this subject with my students and colleagues. I believe that the Spider Log is a powerful tool for organization and self-assessment and I hope that quantitative studies will align with the observed empirical results.

Miller, George A. 1956. “The Magical Number Seven, Plus or Minus Two: Some Limits on our Capacity for Processing Information.” Psychological Review 63: 81-97. International prizewinner Danilo Mezzadri teaches flute at Southern Miss and at festivals in Brazil, Europe, and the US. Danilo has been soloist with more than forty ensembles worldwide. He is principal flute with Golf Coast and North Mississippi Symphony Orchestras. www.danilomezzadri.com

His solo performances have been reviewed as “gorgeous” (Detroit Press) “with a limpid sound, and coaxing every ounce of lyricism” (Jackson Patriot). His recent CD Brazilian Soundscapes was regarded by the American Record Guide as “music of a high order that deserves a welcome from a global audience.