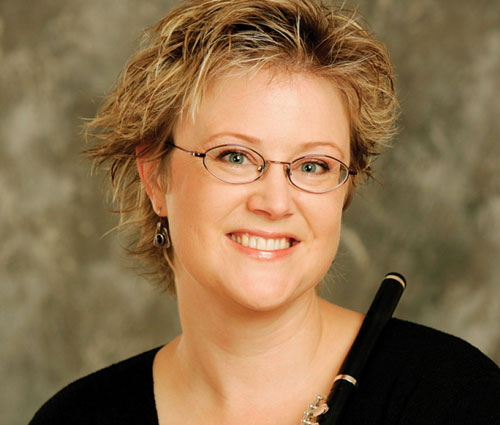 1. Can you tell our readers a little bit about you and what you do?

I play piccolo with the Los Angeles Philharmonic. I joined the orchestra is 2003. Before that I was with the Vancouver Symphony Orchestra, and yes, that means I’m a Canuck!

2. & 3.This month’s issue is about the piccolo.  What was your first experience with the piccolo and what were your thoughts, reactions?  How has the piccolo shaped, guided, influenced, or altered your career path?

I started practicing the piccolo and taking it seriously. That’s when I fell head over heals in love!

I worked my butt off and enjoyed every moment of it. When the Piccolo/Assistant Principal Flute position opened up in the VSO I won that position. As most people do, I continued to take auditions, only this time both flute and piccolo positions. I had been in the finals, and had been brought in to play with a number of orchestras, but the audition I won was Piccolo for the LA Phil. I was beyond thrilled, but there was always something in the back of my head mourning the loss of a big flute position. I think that’s probably a common fear when accepting a piccolo job.

Well, the flute section was down to three, and then only two players. I was thrilled to sub in on principal flute parts, but only if it wasn’t a big piccolo part. I was already starting to make a shift to feeling like a true piccolo player. Well, as I was sitting there one day listening to someone play the piccolo part (brilliantly I might add), it struck me. They were playing MY part and it irritated me. I didn’t feel the same way about the principal flute parts. Sure it would be nice to play principal on Daphnis for instance, but I didn’t like someone else playing my piccolo part. That’s when I realized that I AM a piccolo player. Yes, I play flute and enjoy it very much, but I identify as a piccolo player. That was a mind blowing revelation.

4. Is there a piccolo artist or a composition that you have found to be inspiring to you?

I love the National Flute Association piccolo competitions. They are very well run. I also like that since the finals are held at the yearly convention, performers get a chance to see so many other events and performers. It’s a great experience for opening up your eyes and ears to new things.

5. Why do you think there has been so much interest in developing the piccolo in the last 30 years?

I think the piccolo is being seen less as an auxiliary instrument and more as a legitimate instrument in its own right. I couldn’t be more thrilled!

The piccolo is so fantastic; it can be hauntingly beautiful, woody, earthy, and as well brilliant, light, quick, and exciting. There are so many fantastic pieces being written for piccolo now. It’s a very exciting time for the piccolo!

As well as the push for solo piccolo repertoire, there is more importance put on flute players to play the piccolo well in orchestras. Flute players have to show very good skills on the piccolo to win an orchestral flute position now. On top of that, more and more orchestral pieces are being written with very difficult piccolo parts in all the positions.

7. What is the future of piccolo? Will composers continue to write for piccolo as a solo instrument? Will there be more developments in the construction of the piccolo (please respond to this from your unique perspective, ie, composer, performer, teacher, technician)

I think the piccolo is well on its way to becoming a legitimate solo instrument. The more people hear good piccolo playing, the more they are going to want to tackle it. Expectations follow and behold, we have a movement!

The development of the piccolo is already happening with makers such as Keefe Piccolos. They  have invented the C# trill key for the piccolo! This is a patented design. I don’t know how I ever managed without one. As well, the good makers are constantly trying to learn to do things better. I have had numerous conversations with Jim Keefe and Jan Kinmonth about design, sound, key styling, etc. I don’t begin to know how to make a piccolo, but I do know how I want to sound on it.