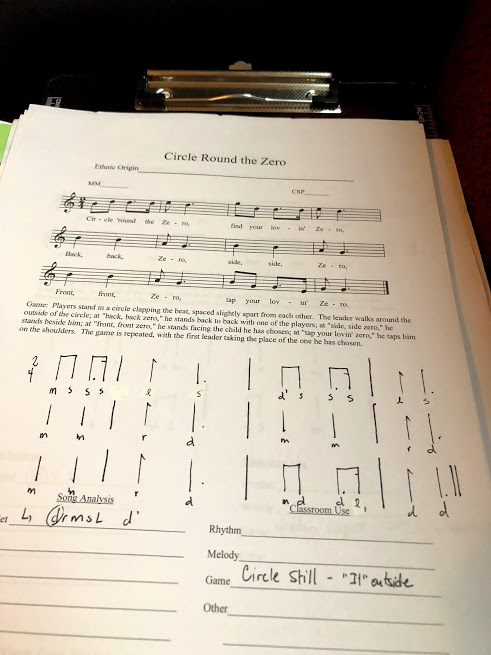 What was your most memorable experience as a child in general music class?

6th grade band began my love affair with music. Before middle school, the musical memories I have are of my grandmother and uncle playing the guitar. They were self-taught, old time country musicians in a small community in Western Kentucky. During my Meemaw’s funeral, I learned she had once stood in on a Johnny Cash show in Michigan before he became famous. I had always longed to sing and play songs, but practicing the flute was always first priority.

While writing my treatise during my DMA program, I researched Robert Beaser’s Mountain Songs, for flute and guitar. The songs in the cycle were based on Appalachian folk songs written hundreds of years ago. I instantly fell in love with the simplicity of the lyrics and melody of the folk songs. I had finally discovered the missing piece to my musical training–which is saying a lot, considering I had been studying music for almost a decade!

Looking back at my formal education, folk songs were frequently dismissed as irrelevant because I played an instrument that could not express text. As flutists, we tend to learn art music written specifically for our instrument that showcases the best of the instrument’s capabilities–fast technical passages, beautiful melodic lines, and sparkling articulated textures.

Beaser’s Mountain Songs are about much more than showcasing the flute’s capabilities. The composer’s goal was to transform the melody in the songs to express the underlying meaning of the text. During my research I analyzed text and song structure more than I had ever done before. I soon realized that folk music connected me to my grandmother more than anything else I had experienced as a classical musician.

“To write a folksong is as much beyond the bounds of possibility as to write a proverb. Just as proverbs condense centuries of popular wisdom and observation, so, in traditional songs, the emotions of centuries are immortalized in a form polished to perfection.” (1941) – Zoltán Kodály

In July, I attended a two week long levels course about the Kodály philosophy at Lenoir Rhyne in Hickory, NC.  If you’ve been keeping up with my Teaching Flute with Kodály series, you’ll know that I’ve touched on some basic methodologies from my experience as a general music teacher. Little did I know, but Kodály’s philosophy for teaching children has indulged my folk song craving. At the same time, the camp pushed my personal musicianship more than anything else before.

When I signed up for this summer’s course, I’ll admit I had absolutely no clue what I was getting into. I honestly thought I would be in the foothills of NC for two weeks learning children’s songs and playing games.  Sounds great, right?

Well, I missed the fine print on my course syllabus that read  “2-3 hours of homework every night.” At first, it was hard. I had to spend several hours every night preparing for class the next day when I wanted to be sleeping. In addition to learning folk songs, I was singing for about 4 hours a day.  2 hours every day I attended a solfa/musicianship class that supported the pedagogy. After the first week, I was sold on the process. I had grown more as a musician in one week than I could have ever dreamt. The faculty of the camp, who were all general music teachers, demonstrated eloquent musicianship and encouraged us to follow suit.

Little did I know, but the Kodály method promotes a high standard of musicianship for the teacher. Kodály says,

“It is much more important who the singing master at Kisvarda (small village) is than who the director of the Opera House is, because a poor director will fail.  (Often even a good one.) But a bad teacher may kill of the love of music for thirty years from thirty classes of pupils.” (1929)

Of course, a “bad” director or musician is relative. I like to think excellent educators are always learning!  For me, learning folk songs has been soothing for my soul. I’m excited I can creatively think about how to educate my flute students while connecting to my family history.

Here are some ideas I am working with. Please feel free to comment and give feedback!