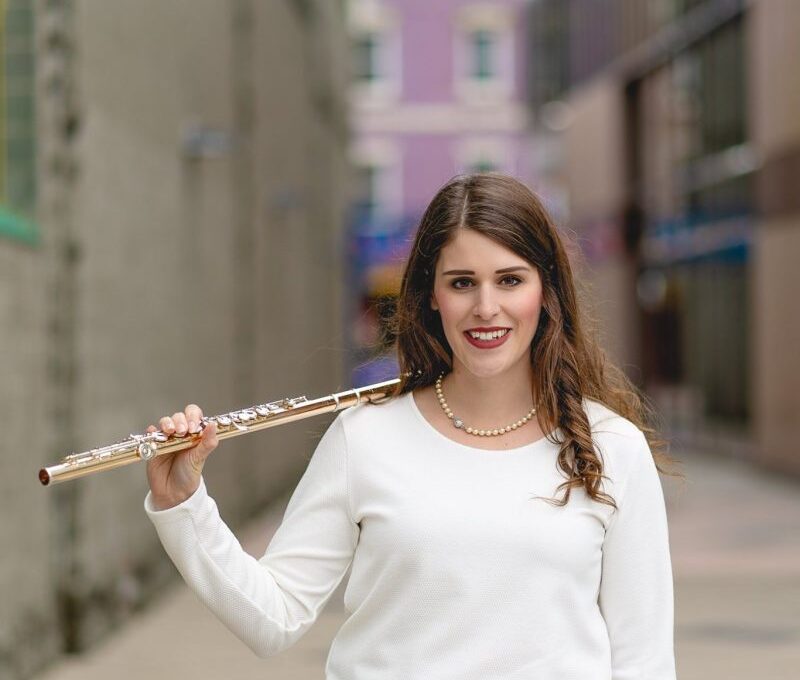 The piccolo has seen a rapid increase in contemporary repertoire since the late 1970s. In that time, the instrument’s range of technical capabilities has been discovered to include nearly all the extended techniques possible on the larger flutes: harmonics, multiphonics, percussive sounds, aeolian effects, singing while playing and more! Diffraction for Solo Piccolo, written by Glaswegian composer James Dillon in 1984, takes in many of these techniques, resulting in a highly evocative piece in rondo form.

A relatively unknown British composer (a result of choosing to remain as far out of the public eye as possible), James Dillon is in fact highly respected within the field, and his music has won many accolades. Dillon is closely associated with the ‘new complexity’ movement which includes other big names such as Brian Ferneyhough and Michael Finnissy and is characterized by complex rhythms and densely detailed layers that are highly expressive. This is most certainly true of Diffraction, wherein it is common to have two or even three extended techniques layered on top of one musical phrase. The result of these elements is a compositional style that is bold and highly evocative and expressive – again, all qualities possessed by Diffraction.

Diffraction is one of many works by Dillon based on scientific processes and phenomena. The piece explores the concept of light diffraction: referring to the ability of light waves to bend around an aperture or obstacle. These patterns in light were first made observable in 1801 in the famous two-slit experiment designed by the British physicist Thomas Young.  The title points directly to this musical reference as does the preface at the top of the score’s glossary:

“a complex figuration will ‘bend’ or ‘spread’ as it touches a pre-determined frequency margin – in his case a low piccolo F – with the resultant emanation of an ‘interference spectrum’ This statement not only illustrates that Dillon is interested in the phenomenon of diffraction, but that he understands that diffraction and interference do not always exist as separate phenomena. That is, when diffraction occurs as a result of passing light through two narrow slits, the resultant pattern is an interference pattern within a diffraction pattern. This phenomenon is called ‘double-slit diffraction’.”

Dillon includes “Notes on Performance” as well as a glossary in the score to assist performers in the accurate preparation of the piece. Dillon instructs that sections A, C, E, G, I, K and M – the ‘melodic’ sections of the work – should be prepared at first without rallentando so that “the player absorbs the density of information before the material becomes weakened by the ‘bending’ effect of the rallentando.” These melodic phrases are based on complex arrangements of triplets and other rhythmic ratios such as 5:4 and 7:6. This melodic content is rich with pitch bends and microtones. The second melodic section, rehearsal C, features extensive pitch bending which the composer indicates is to be executed through finger control and not by way of embouchure adjustment. This is a difficult request to realize as the bending of pitch through technical means is complicated on the piccolo by the lack of open holes.

Dillon first hints at the musical diffraction of the pitch F at rehearsal letter B –the tone is sustained under the effect of flutter tonguing. This diffraction develops over the course of the piece, becoming longer and more complex at every appearance. At rehearsal letter D, we begin to see this diffraction develop: the player is required to pulsate through the harmonic series while maintaining the flutter tonguing effect. Again, this diffraction becomes more complex as the piece carries on – adding trills and even multi-note tremolos on top of the harmonic structure and flutter sound. In the performance notes, Dillon has instructed that in these sections (B, D, F, H, J, L and N) the F pedal tone is “reinforced by extension, but should paradoxically recede into the background as fluttertonguing [sic], trills, pulses and other strata cause systematic interference.”

Dillon asks the player to use a variety of vibrato and air effects throughout the piece as well, including smorzato which appears just before rehearsal letter F. Changes from “vibrato molto” to “natural vibrato” are used throughout and the ability to add a ‘high breath element’ to the piccolo sound and adjust the angle of the instrument on the embouchure (while playing!) is required. Diffraction makes use of microtones at various moments during the piece.

Diffraction is a rhythmically and mathematically complex work, featuring untraditional time signatures such as 16/8, 14/8 and 11/8 mixed in with time signatures which are more familiar to the player (9/8, 6/8 etc.). In such complex music, taking time to mark the subdivisions will enable the player to more clearly see the relationships between the rhythm and the beat. In this case, eighth-note beats work well however there are some sections, like rehearsal E, where sixteenth-note subdivisions may prove more beneficial. Practicing each section of the work individually followed by grouping like musical material together during practice is an efficient way of learning music from this ‘New Complexity’ movement.

Sections A, C, E, G, I, K and M feature the rhythmic challenging melodic content. As with any mathematically challenging work, significant time spent studying the score – working with the metronome and determining the mathematical breakdowns of all the rhythmic structures within the confines of the tempo and time signature – is the only way to understand the rhythmic relationships of the work.

Rather than trying to assimilate all aspects of the composition at once, breaking the piece down into more palatable ‘layers’ of information will allow for simplified learning stages and enable a more rapid learning process. For the purposes of learning Diffraction one might approach the piece using the following practice plan:

The “diffraction” of sound featured at rehearsal letters D, F, H, J, L and N is more technically simple than the melodic sections, however finding the pacing of and connections between these sections can be quite challenging. The musical representation of the diffraction phenomenon develops extensively over the course of the piece. There are two variations of this musical content: the simple version whereby the flutist flutter tongues while overblowing the partials of the F pitch, and the more complex iterations where the player is required to perform trills or multi-note tremolos while also overblowing the harmonic series. The simple versions appear at rehearsal letters D and F whilst the remaining “diffraction” sections (H, J, L and N) feature arrangements of the more elaborate structure of trills and tremolos in combination with the overblowing. Practicing these sections together will assist in tempo maintenance during each return of the material: all diffraction sections are marked at eighth note = 48, and thus should remain uniform throughout the piece despite being disconnected by melodic content. Additionally, practicing these sections together will help the player find a sense of the overarching “hyper-phrase” of the diffraction effect, which spans the length of the piece.

Through careful study and application of each layer of extended techniques, James Dillon’s Diffraction comes together as an invigorating experience for both the listener and performer. The multi-layered complexity of Diffraction creates an immersive experience for the listener. Dillon’s sophisticated use of a broad palette of timbres, the entire range of the instrument and a variety of extended techniques come together to create an aural environment that is both perplexing and highly expressive.  In the words of Tom Service, “Dillon’s music is fearlessly, relentlessly explorative. To hear it is to confront a volcanic imagination that makes listening an act of thrilling, vertiginous unpredictability.”

An avid performer, Gillian plays regularly with the Newfoundland Symphony Orchestra, Opera on the Avalon, the Watershed Ensemble and Atlantic Light Theatre Company, among others. She loves being on stage and enjoys exploring and sharing new music with audiences.

Gillian is a dynamic music educator and social entrepreneur. In 2011 she founded Project Grace, an el Sistema-inspired community music program, followed by the spin off social enterprise The Bethany Centre for Arts and Community in 2018. Her private teaching studio, Tutti Flutey, offers lessons to aspiring flutists from 4 to 75 years old!

In addition to teaching and performing, Gillian works with Memorial University’s Faculty of Business Administration as the educational support coordinator for the MBA in Social Enterprise & Entrepreneurship. Gillian lives in St. John’s with her fiancé, cat and horse. You can find her on Instagram: @gilliansheppardflute