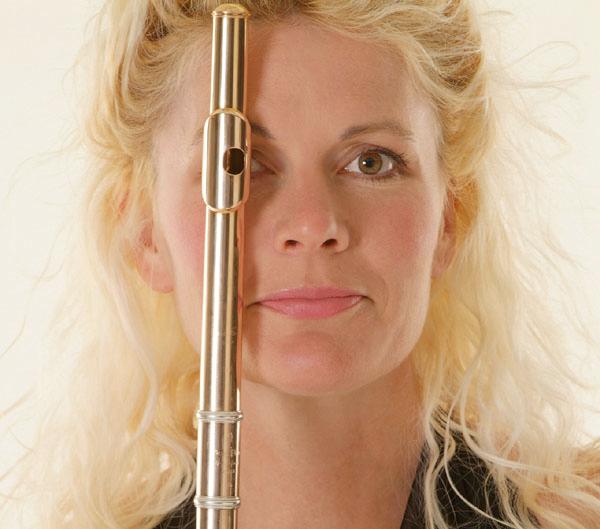 Rhonda Larson is a Grammy Award-winning player of the flute, born and raised in the mountains of Montana. This Big Sky Country in the Wild West helped form her into a nature-loving, free spirited, trail blazing artist. She entered the national music scene by winning first prize in the National Flute Association’s Young Artist Competition at the age of 22, including a Carnegie Hall debut. Shortly thereafter, Rhonda was invited to join forces with the Paul Winter Consort, initiating her journey into a rich palette of music gleaned from around the world. Rhonda tours world-wide, and has a discography of over 20 commercial recordings. As a sought-after teacher, she conducts masterclasses at universities, flute organizations, community outreach events, and individual instruction. She owns and operates her publishing company, Wood Nymph Music, producing her sheet music from graphic design to distribution. Rhonda and her husband, Dr. Lee J. deLisle, live in Connecticut, and part time at their home in the medieval village of Roccantica, Italy. When not playing the flute, Rhonda can be found outdoors.

Tell us just a little about your background. How did you come to be a Grammy-winning international performing artist?

Not until well into my career, after college, did it actually occur to me that if you want to be a solo flute player, the music you will play from the start is classical music—since there is no other option at the time one begins learning flute. I thought nothing of it, and love classical music, and knew I would do this for my life’s music. But I had one concern while still in college preparing myself for such a solo career: our flute repertoire. It meant that I would generally be playing the same dozen or so best pieces for the rest of my life. I worried about them be coming stale for me, so my solution was that I would memorize everything I played, requiring complete attention during every performance—memorization being the method to keep the music fresh. My first break came the summer before my senior year in college, in winning the NFA Young Artists competition.

At the very end of my senior year, I was ‘discovered’ by Paul Winter (of The Paul Winter Consort), and literally walked from college graduation into this professional group. I had known and loved their music since high school, so it was a great surprise to be invited to become a member of their group. The experience with the Consort expanded my musical palette exponentially, and I knew I could never go back to just playing Classical music. I realized I could play any music I loved, from around the globe! After six years with the Consort, we won a Grammy Award for our “Spanish Angel” recording from a live tour throughout Spain, and it featured more flute than any previous recording with them.

When I think of you and your performing life, I always think of travel. I love my memories of seeing you play so many different kinds of flutes and so many different styles and genres of music from around the world. What has all your travel brought into your life?

I’ve always thought that traveling is the best education an artist can receive, due to the diversity of cultures and people. It not only allows for a better understanding of human behavior, but it brings home how profound and important music is across the globe. No other art form offers what music can, no matter what language or societal issues are a particular culture’s norm. Traveling also showed me how many flutes there were around the world, and I began collecting and learning them, one at a time. It led me to composing my own music that could include the use of these various flutes, and to immersing myself in the musical cultures from which they originated.

Your classical skill set is so impressive—you have such flawless technique and such a rich, vibrant sound. What sorts of things do you do to stock your toolbox, so to speak? It is all in how I train while practicing, with the goal of how I want my performances to be. My facility on the flute cannot be an issue—after all, the challenges of the flute are our problems to solve, and should not be noticeable to our listeners as much as is possible. First and foremost, I focus on relaxed (liquid) fingers, and as little tension as possible in how I produce the sound or even how I use my body. If I pay attention to these finer points, how it sounds, how to deliver it when in training (practice), then I have complete, unhindered freedom when I perform.

What is the difference, in your mind, between life as a composer and life as a performer of other people’s music?

Excellent question, I wish I could answer it! I never thought I would write my own music, so it is a great surprise, and I am reluctant to call myself a ‘composer’. I write so I can have music to play, and that is how it started—I needed something new, tailored to my interests and certain techniques that appealed to me on the flute. I write to perform, so I can’t really separate the two. But I can say that writing my own music is often the most difficult task of anything I do. It takes so much time, and even then, it doesn’t guarantee the end result. The process is very mystical to me; it’s like a gift offered to me, and I have to figure it out—catch it while it comes past me in the wind, metaphorically speaking. Playing classical music, I never thought much about the fact that this was someone else’s music, because as interpreters, it must become our music. But what an amazing difference when the music comes from yourself, and is fully relevant to not only the time in which you live, but is an offering to give back to your world! The circle of this process is like a gift given to me. I must do the work of developing and comprehending it, then it is given back to the world—which again is a gift back to me by the very act of playing it forward into the hearts of the hearers!

It’s really easy for those of us with Classical training to find ourselves locked inside the box of printed music. How can we start to break out?

I couldn’t agree more with the ‘locked box’ syndrome.

Too many people play right TO the stand/music, not to its listeners, and the printed page tends to bring this about. It is understandable that people are afraid to play from memory, but one can at least practice their music from memory. It is incredible how it opens your ears and gives you a real depth once you play from the inside out, rather than the outside in (reading).

Learn slow tunes by ear, never looking at a single written note. Or, start by memorizing Mozart, because it has predictable sequences, developments, patterns and scales. It teaches us how to organize our brains in order to play from memory. There is a profound freedom in playing without reading, and with no music stand to block us from the people to whom we are playing.

I’m someone who spends the bulk of my professional life teaching flute lessons to children and teens. I’m always trying to find ways to teach my students how to find their own creativity and their own voice. What are some ways you might encourage those things?

I think it can start with the exercises. Get them to make up an exercise for any particular issue—or make it up together. This will start to develop a personal/meaningful sense of playing that will already be more musical. Generally, the etudes and all the technique work that is such a huge focus so early on tends to divorce the student from musicality, because etudes aren’t designed for that. Think of the benefit of combining both elements, technical practice that is musical, rather than compartmentalizing technique over here in this corner for twenty minutes, music over there in that corner for twenty minutes. Not segregating exercises from musicality other than to refine them is more true to the end goal of performing/playing. If a student doesn’t feel anything because of the nature of the exercises, it’s just like typing, a means to an end that will someday happen (music), but often doesn’t. For example, my typing is not the meaning of what I’m writing, only the technique/means. But in my opinion, etudes are too heavily emphasized too soon for young students, and they learn to despise the work, and then don’t ever get to the joy/music of it. If a student learns to create some of their own exercises, they are also learning about writing music, and this can develop with time to expand to writing their own music.

Traditional career paths in music (full time orchestral or teaching work) are more difficult to follow than ever, and sometimes the nontraditional path is much more fulfilling. Do you have advice for young musicians who are trying to find their niches in our world?

I always say that I could never have predicted doing what I do, today! It was not a plan put down on paper, it was a life that offered a bread crumb here, another one there, and I followed them. The bread crumbs are the clues or opportunities we get, and it often takes courage to follow them, especially if you don’t have an example of others following a path that looks similar to yours. I think that to diversify oneself in music is a helpful mindset for today’s careers. Be able to do more than just one thing–one style/genre, one flute, one technique. Ask yourself what music really appeals to you. Follow it! Try other flutes, because the world is full of their existence and offerings. Learn to make up your own music, just for fun, not with some pressured goal in doing it. Further, be ready for anything. If an opportunity comes, and you are not ready, you will not follow the opportunity. If you are ready and no opportunity comes, you must try to create one.

Best of all is when you are ready, and the opportunity comes: you open that new door, entering a place which may be entirely unique to your individual path.