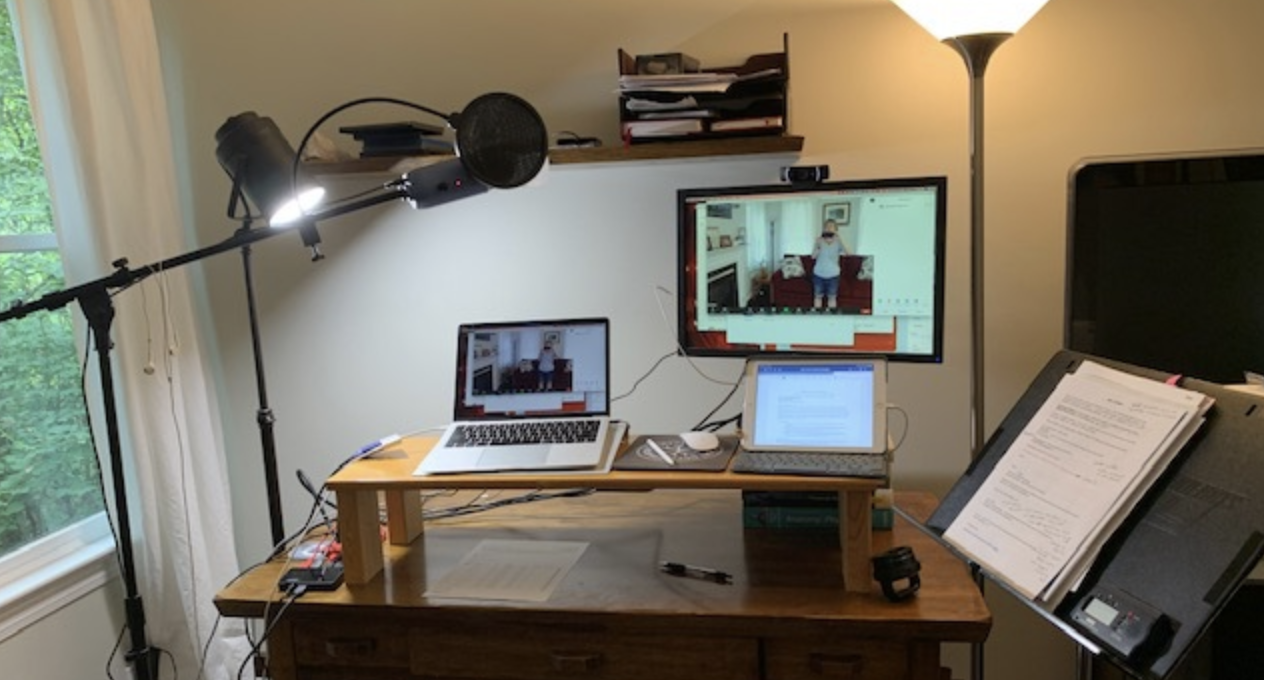 This is strange time for performing artists. Due to circumstances beyond our control, our stages, venues, and theaters are closed. Pre-Covid performances with a live audience are not possible yet (key word yet.. the time will come). But that doesn’t mean that there aren’t performances, they are just different right now. What hasn’t changed is the out-of-the-box thinking used by performing artists to find a way to get the thing done, even if it’s different than in the past. Another thing that absolutely hasn’t changed is the need for performing arts in the world. How many people do you know who reported that watching livestream opera, music theater or impromptu concerts from living rooms and basement studio around the world made their day during active quarantine times?

This is all great, but it’s a little weird playing a concert in your living room, while looking at your own face on your phone. I did it last weekend. My students have reported that there’s still performance anxiety for performing remotely for studio class, auditions or even lessons. The key is figuring out how to include the audience, especially when they aren’t in the same physical location. Here are some ideas that work no matter what the distance is between you and the audience.

Prepare. Yes, there’s no substitute for preparation. You must spend the time figuring out what your musical intention is, choosing the movements that allow you to successfully execute that musical intention, and then practicing them so that you can do them consistently and reliably.  If you take to the performing stage and haven’t done your work in the practice room, then you deserve to have a little bit of anxiety.  You haven’t done the first step, which is to adequately prepare.

My students frequently tell me about things that happen when they are in stressful performing situations. Some report that they suffer from a type of tunnel vision… black stuff creeping in from the sides so that all they see is the music on the stand. Others report that they sometimes have no visual memory of the performance at all—their experience is limited to only the sounds they were making. Some actively try to block the audience out because it’s scary. Some feel like somebody else is playing the instrument. Some talk about this voice that’s constantly critiquing in their brain… “you missed that, this note is out of tune, missed the run, goofed up that entrance with the pianist, they are going to hate me, I’m a terrible musician,” etc. This one, in particular, is a vicious circle. In all cases, what has happened is that they are no longer in their body, which is where the music making happens. All of the sounds we make as musicians are created by some type of movement, somewhere in the body, but they are stuck in their brains. So what do you do recover yourself when you’re missing? In my class, we work on including more of the information coming in through all of our senses. Almost all of my students have at least once sense that really works to help them get back into their body and out of this cycle when they consciously choose to include this information in their awareness. Some find that including tactile information, such as the feeling of clothes on their skin, a bracelet, their glasses, the feeling of the keys under their fingers or air on their face is effective. Others find that purposely choosing to allow auditory information to be present in their awareness is helpful. This would be including the rustling of audience members, the candy-wrapper person (there’s always one), the crying baby, the cell phone ringing, the sound of the page turns, or the hum of the air conditioning. Some report that becoming aware of the floor beneath their feet and the movements of breathing, which are in the kinesthetic sense category, really help.  Many people, including me, find that consciously choosing to expand our peripheral vision helps. This can mean including the space above and behind you, including the page behind the notation or the black frame of the music stand around the music. This visual information isn’t focused… it’s kind of fuzzy, but it’s present. This techniques works well for so many people, but I didn’t really know why until I was listening to Michael Gervais’ podcast “Finding Mastery.” In this particular episode, he was interviewing Dr. Andrew Huberman, a neuroscientist at Stanford who has been studying vision and who explained what happens in this type of situation (https://findingmastery.net/andrew-huberman/). Dr. Huberman says that “The fastest way to introduce calm to the nervous system is to employ this amazing ability that we all have to switch our vision from focused on a particular location in space. You’re going to dial out your gaze. What it’s doing is disengaging a circuit for alertness and vigilance in the brainstem that leads to a very rapid but meaningful shift from, let’s call it a higher stress state to one of more calm.” Later in the interview he states, “When you’re in panoramic vision not only can you see more of your visual scene, but there’s a relaxation of the stress response. Your situational awareness goes up. Your reaction time goes up 4 times and you’re calming yourself using a mechanism that was built for this purpose.”  All this is possible by choosing to include more visual information in the periphery.

After experimenting a bit, you can find which sense is your Spidey-Sense, like in the Spiderman cartoons and movies. You can then harness that tool to help you be present in your body and not stuck in your brain.

The next thing is that you have to show up in the performance space with authority and conviction. Turn and look at the space from every angle. If you’re in your living room, this would include the walls and the ceiling and all the space therein. It can also include that living room as part of your entire house, that house as part of your neighborhood, and eventually into the whole world. What if you took the stage, wherever it is, with the mindset that you were inviting the audience into your space instead of the other way around? This statement is often a game changer in my class. Most students think that once they walk out on stage, they are in the audience’s space. I disagree. The audience is there to hear you, not the other way around. This raises the whole question of why do we do this thing called perform music for others?  What’s the point? To me, the whole point is to communicate something to the audience. You cannot have a conservation by yourself and so the audience must be included.  This is absolutely true for auditions, as well.  The panel wants to hear you, they want you to play well.  They are your audience for that brief time and, therefore, they need to be included.

Step 4:  Remember the rule of three

I don’t remember where I first heard of this, but I’ve heard both Noa Kageyama of Bulletproof Musician (https://bulletproofmusician.com/) and Dana Fonteneau of Whole Hearted Musician (https://www.danafonteneau.com/) talk about this rule. It states that 1/3 of the audience will love you, 1/3 will hate you and 1/3 will be undecided. It doesn’t matter who you are or how well you play. You cannot please them all. That’s an unrealistic fantasy goal and isn’t going to happen. Do not waste the time or mental effort on it.

You’ve prepared, you are present in your body, you have claimed your space. Now it’s time to simply play the music. You trust your preparation, you know what you want to say, so you just do it. Thanks for the phrase, Nike.

All of this works for audiences right in front of you or around the virtual world. Here are a few other things to consider for remote performances:

~ Can you choose to include the space behind your phone, laptop or tablet that you’re using the stream the performance? This is super cool and we explored this a lot in my class during spring semester when we ended up in a fully remote teaching situation in just a few days.

~ Look directly into the camera and smile. People want to hear you. They want to see human faces smiling and not just eyes gazing out above a mask.

The world desperately needs what the arts can offer.  Don’t let the fact that there’s no physical audience stop you. Go forth and be fearless!