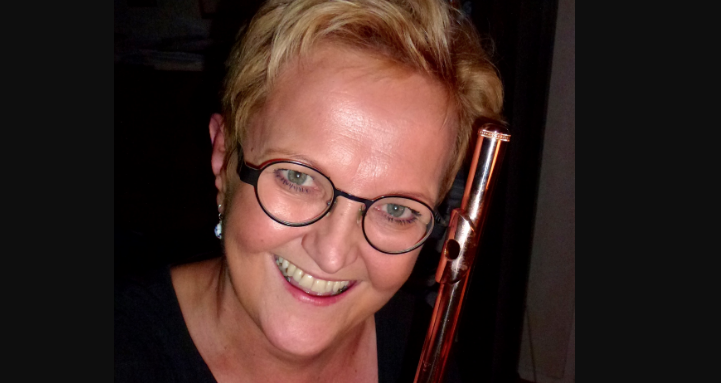 After completing my second level Kodály training for elementary general methods teaching, I started applying the method to private lessons. If you have read my column, “Teaching with Kodaly,” I write about my experience. I also researched for a beginning flute method based on the Kodály method. That is where Jaana Laarsonen comes in. I found her books, entitled “Colour Flute,” through the recommendation of an Australian Kodály teacher and flutist, Mark O’Leary. Colour Flute is stunning; It is beautiful, easy to use, and adaptable for all children wanting to learn to play the flute. Someday I hope to travel to Finland to learn from Jaana!

Amanda: Tell us about your career?

Jaana: I studied at the Helsinki Conservatory with Éva Hibay where I graduated in 1982, and then continued my studies at the Liszt Academy in Budapest, Hungary under the tutelage of Lórant Kovács and later Tihamér Elek. I played my diploma concert in Helsinki in 1986. I’ve also taken part in masterclasses with Trevor Wye, Patrick Gallois, Frans Vester and Mikael Helasvuo among others. I have also studied new music with István Matuz and Mikael Helasvuo. I have performed both as a chamber musician and as soloist, mostly in Finland and Hungary.

I started teaching in 1986 at Helsinki Conservatory and the Hyvinkää Music Institute. I have been a lecturer and teacher of flute and chamber music at East Helsinki Music Institute since 1987. In 1987 I was impressed by the work by Géza Szilvay, the creator of the Colourstrings method, and I started to develop a method for flute on a similar basis. In addition to Finland I have taught the Colour Flute Method in teachers’ training courses in Hungary, Ireland, England, Latvia, Estonia, Austria and the Faroe Islands.

I have also run masterclasses for young players in Finland and Estonia, and workshops in several countries on games, coordination and improvisation in instrumental music teaching. Flautists from all over the world have visited the East Helsinki Music Institute to observe our method.

AH: What inspired you to create a method book for flute that uses Kodaly?

JL: Kodály’s ideas about music education inspired me in many ways.

1. Relative solmisation has proved useful in teaching the flute: it makes figuring out tonal music, learning by heart and writing music down much easier. Intonation improves to an astonishing degree. Transposing simple melodies, transforming, and learning by ear are easy using solmisation. Improvisation also acquires new dimensions as the child’s ability to hear intervals and chords improves. The formation of different scales (modes, pentatonic and whole-tone scales) and chords is also later far simpler.

Using hand signs is very practical with small children. When reading music is still quite slow, hand signs can be like a second reading method. Kinesthetic learning helps them memorize and understand the music they are playing.

2. I also liked Kodály’s idea about the child’s holistic growth through music and play. When I started as a flute teacher with beginner students as young as six or seven years old, I was not able to find suitable material for such young players that would be understandable, logical, sufficient in developing technique and musicality, and most of all fun. Following Kodály’s ideas of using folk music, all kinds of music, children’s songs and stories in a playful and logical way is the main idea in my books. I hope they open the rich treasury of music and the joy of playing to many children.

3. I try to inspire flute teachers to use these books in a creative way. For instance to use rhythmical accompaniments, invent second lines or stories, variate melodies etc.

4. Many ideas are not written in the book, because I wanted the children to focus on music reading, colours and pictures. Written text would disturb that. I hope that the teacher’s guides will be translated to English some time in the near future.

AH: What are the major differences between Colour Flute and other method books (i.e. Trevor Wye, Suzuki)?

JL: Colour Flute gives time for children to advance slowly in the beginning. There are many musical aspects that are introduced in very small packages. The idea is to teach musical forms (A-B-A etc.), intervals, rhythms and melodies so that children really understand them and are able to read and memorize their meaning. It’s important to come back to already learned pieces several times with always some new aspect (dynamics, different tempo, different character etc.). This is to fulfill Kodály’s idea about deeper understanding of music and the joy of learning.

Singing and clapping the rhythm are the basic tools in teaching in the Colour Flute Method. According to Kodály, movement and dance should be part of musical education. Movement has an important part in children’s flute learning; through it, understanding and enjoying the characters and tempos of the pieces will be much easier. As with the hand signs, using kinesthetic memory also helps to memorize music.

Colour Flute develops all the senses simultaneously but in a playful way, using games and images. The goal is also to encourage students to find their own musical ideas and give them tools to express themselves through music in many ways.

The colours are used so that every scale has a different colour. Relative majors and minors have the same colour.

Colours are used to help children to understand the movable do system (relative solmisation).

Because children should be able to sing and understand the music, there are no modulations or accidentals in book A. The idea is to learn all the pieces by heart. Playing by heart is a skill that is easy if you learn it from the beginning.

Colour Flute uses images to make musical and rhythmical phenomena easy and fun to understand and remember. This follows Kodály’s idea of learning music in a playful way.

In book B, children will learn more scales in a playful way, still only one scale at a time. Simple modulations are taught in a way that’s logical and understandable. All rhythmical elements are first explained and only then used in music.

Colour Flute also teaches musical and technical things in advance with easy exercises and small songs, so that they are already familiar when needed in more demanding music. These kind of exercises can be used for double tonguing, high notes, modes, etc. Teaching with Colour Flute includes physical training and coordination exercises as an essential part of learning from the very beginning. This is not written in the books, but ideas and exercises can be learned in the courses.

Playing together from the beginning is recommended. Color Flute offers ideas for logical and useful ways to do this. Playing in turns, in canons and first with open intervals offers the best way to keep the quality of tone and intonation on a good level. Later on, children are ready to play more demanding material in tune because their inner hearing has developed so much.

Playing together is also very important for developing social skills, which is one of Kodály’s basic ideas of holistic education. Kodály believed that people can understand different ideas and cultures through knowing and understanding their own culture and valuing others. He believed that this can be achieved through music and arts.

AH: I love the design of Colour Flute. What was your inspiration for the physical appearance of the book?

JL: Lauri Toivio, who is the illustrator and also responsible for the layout of the Colour Flute books, is also a composer and a flautist. He was interested in Colour Flute method and doing the design of the books.

Most of the images used for rhythmic phenomena are based on the images used in Géza Szilvay’s books and made with his permission. However, the outlook of the images is still very different from Géza’s books. Our idea was to create books that would be visually interesting, fun and pedagogically logical, and would reflect the visual world of the children of our times.

In book A, for instance, there is a little chap who often introduces new musical or technical elements in pieces. In book B, there is a small image in front of every piece that tells you if the piece is folk music, dance, composed music or something else. We invented lots of pictures describing things such as musical or technical issues or the character of the music.

To help the children in the beginning we use a relatively big font for the music and clear colors. In the beginning, we use do and la clefs depending on the scale. I also love the humorous characters that Lauri has created. We had long discussions about the character of the pieces and about how the illustrations could best express that.

With Lauri, we tried to create books that would make flute playing like an adventure to the land of fairy tales, funny and interesting.

AH: How can we learn more about you and the method?

JL: I’ll be working on a Colour Flute website next year. So far I have a Facebook page (Colour Flute) where some basic information is available. Information about upcoming courses can also be found there.

You can also read more about the method and books from our publisher’s website: http://www.fennicagehrman.fi/sheet-music/colour-flute-colour-clarinet/ There you can find guidelines for teachers and parents, which is a short introduction to Colour Flute.

If you have any questions about the courses or the method, I’ll be happy  to answer your questions by mail: jaana.laasonen@ihmo.fi.

Next year, there will be a course for teachers held in Finland. The course consists of three days of A book material, and there will be another weekend for B book during the semester. Usually courses are organized by local flute associations, so if you have enough people who are interested, I’d be delighted to see if we can make something happen!

And finally: if someone is traveling to Finland, you are most welcome to observe my teaching anytime during the semester. Just let me know!