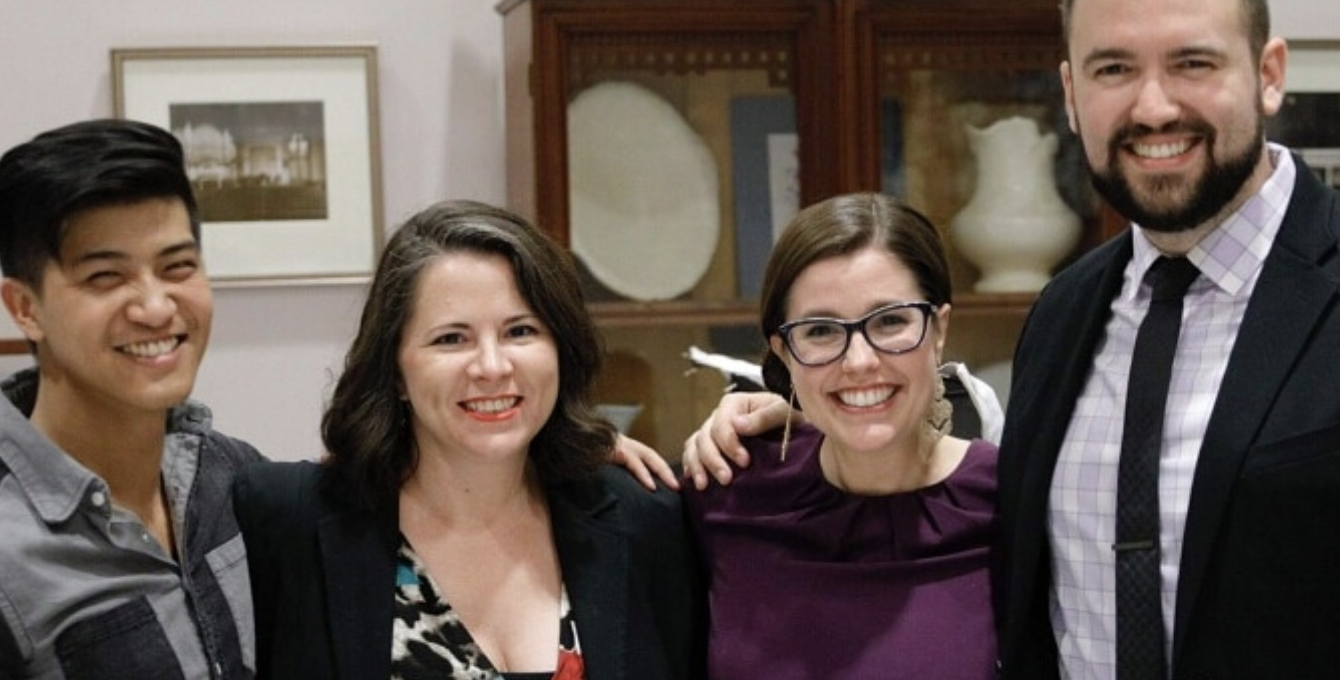 Mary Matthews: We are sitting here on your couch in Doraville, GA with a snoring pit bull, two cups of coffee, and a few copies of our book scattered around to talk all things Beatboxing & Beyond! We are so happy to finally share this book with the flute community and discuss our collaborative process and the path that led us here today.

Nicole Chamberlain: We have had quite the adventurous path!

MM: Yes we have, and aside from camping trip mishaps, failed international travel, and a flute fair emergency room visit, we have had a lot of fun collaborating on projects for the past 10 years!

NC: Yes, I started this whole thing in 2011 with a cold email to a couple of strangers, asking you to premiere my duo for two flutes, Chatter. Why in the world would you answer an email from a random composer?

MM: Great question! Well first, I would like to say that I do try to answer every composer that gets in touch with me even if it is just to say that I hope to program their music sometime in the future and thank them for thinking of me. I keep a running wish list of pieces to perform when I program my own chamber and solo recitals.

NC: That makes me feel so special.

MM: Haha, you are special! There were a couple things that set your email apart paired with a little bit of perfect timing shortly after we heard from you. If I remember correctly, in your email you said that you had listened to our flute duo recordings online and thought that Chatter would be a good fit with our skills and previous programming. We agreed and absolutely wanted to premiere the work, but we wanted to save it for a bigger concert so that we could give it the premiere it deserved. Then two days later, we were invited to perform at the 2011 International Alliance for Women in Music Congress in Flagstaff, Arizona. Chatter was the perfect fit for this concert, and that was the first time we collaborated in person.

NC: Well, you remember Flagstaff. We got lost on a dirt road in the back woods at night trying to get back to the house you were staying in. When none of us ended up murdered by a stranger we met on the internet on that trip, I think it was a good sign that we should keep working together.

MM: I agree. It all turned out well…

One of the things we loved about Chatter was how effective and well done the extended techniques were. You quickly became my go-to composer for exciting new music that showcases all the flute’s possibilities. You had already been writing extended techniques before Chatter, so can you talk about how you got started with that style?

But there was a hitch in my plan. I hadn’t had a serious study of extended techniques in my prior education on flute, so I set out to teach myself. To do that, I had to write pieces that I could tackle. I could see there was a gap of repertoire for flutists to learn how to incorporate extended techniques into their playing. I soon realized that not only did I have to teach myself these techniques, but many others who wanted to play my music also had similar gaps in their training.

NC: So, what I’m hearing is that I made you the flutist you are today.

MM: Haha, yes, you get all the credit.

Then, when I ultimately started teaching your music and other contemporary repertoire, whether it was your high school flute choir music when I taught privately in Connecticut, your band music when I taught in Colorado, or now your collegiate-level solo and flute choir music at my position at Tennessee Tech, I had to develop a methodology for teaching extended techniques to all ages.

NC: That’s when you had to start interjecting extended techniques into scales, Moyse, Taffanel & Gaubert, etc., and I realized that I was having to help people learn my music through online coachings and workshops. Since I can’t be there in person to coach each person through my music and you were struggling to write exercises to teach beginning extended techniques, we were both feeling a need for an educational resource around the same time.

MM: Yes, and of course we first had this idea around 2017, but we didn’t have time to take on such a big project then. Fast-forward to March 2020 when we were lamenting the cancellation of a collaboration and premiere in Tokyo and many other exciting plans, and we realized we finally had time. This became a positive way to keep us busy and motivated during the first year of the pandemic.

NC: Yes, it was a whole lot of video chats that led to this book. We had a lot of goals and many things we wanted to cover, so we really had to take a lot of ideas and whittle them down into something that is manageable for a player or teacher who is fairly new to extended techniques.

MM: And one of my biggest goals was also to address the fact that extended techniques really improve traditional flute playing – we use whistle tones, harmonics, and singing and playing as tone exercises long before we see them in repertoire, for example. This idea is what led to the structure of the book. I came up with practice categories – tone development, ear training, projection, coordination, air support, and endurance – and together, we determined which extended techniques improved each of these traditional flute and musicianship skills.

NC: It was also important that each etude focused on a single extended technique, and that each etude began with a simple form of the technique and developed to a more advanced form by the end. Everything we did we did in this book, whether it was composing the etudes or writing the practice tips, was pedagogically motivated. I would compose two or three etudes, send them to you, and you would write the teaching tips with the etude in hand to make sure that we addressed specific practice challenges in each section.

MM: Absolutely. Our goal was to take some of the best traditional teaching practices and methodologies and apply them to extended techniques, making them accessible and putting them all in one place. I also used what I learned while actively teaching these concepts to my students daily. If a student faced a particular challenge in a lesson while learning an extended technique, I would be sure to go home and write down the advice that ended up working for that student in the book.

Another thing we’re very proud of is the repertoire list compiled in the book. I wanted to give flutists a place to go to study and perform each technique further after working through our book, so I provided at least two examples of repertoire that uses each extended technique. The examples were composed between 1950 and 2020. This list really demonstrates how long extended techniques have been a staple of the flute repertoire and how important it is that we study and teach them well.

NC: Yes! This is why we’re friends. We agree on the important things. I’ll also add that while these are great teaching pieces, I also hope they are also interesting enough that an audience will enjoy them if they are performed on stage.

MM: Yes, these will be great performance pieces, and I hope some of my students will program them throughout the year. So, as we wrap up and reflect on this project and the collaborative process, we know that this book doesn’t cover everything we have to say on the topic, so we are planning on writing a second volume at some point. Mainly because I want to come back to Doraville and hang out with your dog.

NC: Obviously that is the main reason.

MM: So Nicole, for people reading this who want to purchase our book, where should they go?

NC: They can visit www.SpottedRocket.com to learn more and purchase a copy.

MM: Thank you, Flute Examiner for giving us this opportunity to discuss Beatboxing and Beyond! To the readers, feel free to contact us with any questions at marymatthewsflute@gmail.com or nikkinotes@gmail.com

Flutist Mary Matthews enjoys an active career as an international soloist, chamber musician, and orchestral flutist and has performed on four continents in venues such as Carnegie Hall, Severance Hall, the Sydney Conservatorium of Music, Fundação Universidade do Sul de Santa Catarina, Festival Goethe Institut Música Nueva, and Cité Internationale des Arts. She is a member of nationally acclaimed chamber ensembles Khemia Ensemble, Maryland Chamber Winds, and Duo Rossignol. Dr. Matthews is Assistant Professor of Flute at Tennessee Tech University’s School of Music where she is a member of the faculty wind quintet, the Cumberland Quintet. Additionally, she is principal flutist of the Bryan Symphony Orchestra and records soundtracks to movies, television shows, and video games as part of the Ocean Way Studios scoring orchestra in Nashville. www.MaryMatthewsFlute.com

Composer and flutist Nicole Chamberlain (b. 1977) has a varied career in the arts, acquiring simultaneous bachelor’s degrees in Music Composition and Digital Media at the University of Georgia. Her original compositions are influenced by storytelling and visual imagery from her former day job as a web animator and designer. Chamberlain’s music “heavily utilizes extended techniques [that] play into the theme or story of each piece to sonically enhance its meaning” (The Flute View). “Being a virtuoso flautist herself has informed her ability to write for the instrument with thrilling facility and endearing charm.” (Gramophone Magazine). As a Powell Flutes Artist, Nicole has been enabled in this endeavor to perform her music to a wide audience and wouldn’t trade in her Powell Conservatory 9K Aurumite Flute and a Powell Handmade Custom Grenadilla Piccolo for the world. www.nikkinotes.com