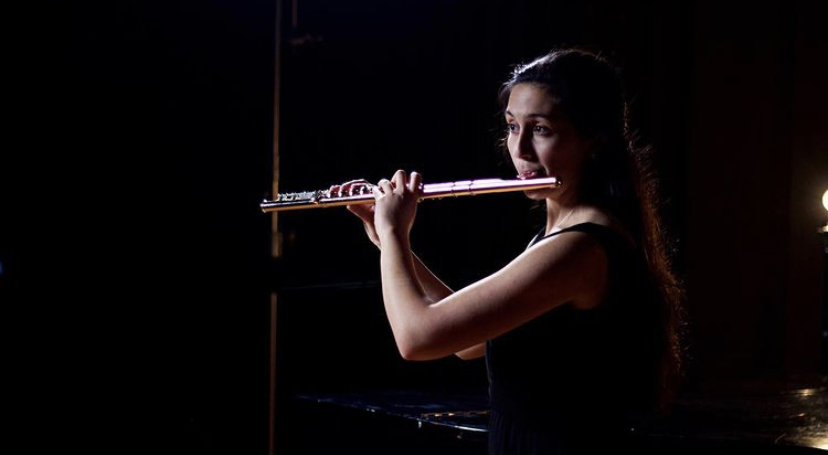 J.S Bach’s Partita for Solo Flute in A minor is one of the true gems of the flute repertoire. Its beautiful lines, soaring runs, and passages which leave audiences breathless can express sophistication beyond words, yet this piece can be incredibly confusing and difficult for flutists to perform well. One of my favorite things about playing the Partita is the limitless potential for phrasing and nuance. This work has so many musical possibilities (such as color, articulation, etc) for performers to navigate, but it’s easy to get overwhelmed by Partita’s sheer technical difficulty, breathing choices, and mental or physical fatigue. However, with the guidance of some historically informed performance practice, you can learn to play the Partita successfully.

Johann Sebastian Bach (1685-1750) was a leading composer and organist of the Baroque period. He was extremely prolific, writing over a thousand musical compositions, and became one of the most famous composers in history. Bach wrote many great works, like the six Brandenburg Concerti and St. Matthew’s Passion, in addition to over a dozen solo instrumental suites for violin and cello. The Partita for Solo Flute, BWV 1013, is his only work for flute alone, and it consists of some of the most difficult writing for the baroque transverse flute, the predecessor of the Böhm system flute. The transverse flute has 6 holes and 1 key, which makes quick, chromatic passages difficult on the instrument. However, it has a unique range of tone colors that a Böhm system metal flute cannot replicate, and despite several shortcomings, the transverse flute was quite popular during Bach’s time.

Bach presents the Partita in four movements, each of which is titled with a dance form. The “Allemande”, meaning “German” in the French language, is a dance which carries serious and grave emotions. It must be felt in two, not four, in order to emphasize the strong downbeats, and it should be played at a tempo where audiences can comprehend the many harmonic progressions Bach employs. The “Courante” or “Corrente” in French and Italian, respectively, denotes a continuous, running dance. This light movement carries a sense of perpetual motion, and the unevenness of its phrases adds to this sentiment. The freest movement of the work is the “Sarabande”, which features balanced phrases and serious but tender emotions. The Sarabande’s slow tempo and contemplative atmosphere means that flutists can play quite freely. The culminating Bourée Angloise rounds out the work on a lighter note, and flutists can play this swift movement with some flexibility.  Although it is tempting to emphasize the piece’s strong duple meter, buoyancy should prevail over heaviness during performance.

Bringing your ideas to life

Begin learning the Partita by listening to a variety of performances on modern and historical flutes. In particular, pay attention to performers’ expressive choices, such as tempo changes, dynamic shifts, tone colors, etc and note stylistic choices you like. This preliminary study will set a foundation to help you consider your own ideas concerning articulation choices, dynamic changes, etc. After doing this research, begin sketching some of your own articulation and dynamic ideas into your part, and try them out during practice as you get comfortable with the music.

If you need more inspiration for developing a unique musical interpretation, consider completing an in-depth analysis of the piece or a given movement. First, mark places in your score where you hear repeated motives, even if they are in different keys. Second, identify sequences – those are motives that repeat twice or more, usually up or down a step from the previous motive. Finally –  if possible depending on your ability and interest – work to deeply understand the harmony by completing a harmonic analysis of a given movement. A possible harmonic analysis of the first half of the Allemande follows below.

At this stage, it is crucial that you try several different interpretations in the practice room in order to determine what is stylistically appropriate and musically sensitive. Before practicing, consider multiple phrasing and articulation ideas to facilitate the learning process. As you continue to develop your articulation, phrasing, and dynamic choices, remember that there is no single “correct” answer as to how the Partita should be played. Flutists create a wide variety of interpretations, but be sure to have a teacher listen to you before performing the piece.

It is no secret that performing the Partita presents an endurance challenge for even the most experienced flutists; however, with patience and perseverance, you can build the physical and mental stamina necessary to perform the piece. To increase physical stamina, an excellent practice tool is to run a movement of the Partita twice in a row with minimal pauses in between runs. This is not an easy task, and you should do it only once you are comfortable with the movement, but it will allow you to comfortably perform without experiencing much fatigue. A great tool to increase mental concentration is to learn weekly etudes, particularly those with lengthy sections of continuous notes and articulation challenges. After you’ve learned a given etude, begin running a few lines at a time, working up to half of a page, a whole page, and eventually the full etude. Aim for accuracy as much as possible and challenge yourself to remain relaxed, but actively focused as you play. Practice etudes daily and your mental focus will improve considerably.

Embouchure tension is another common challenge that the solo Partita often magnifies, especially since there is very little rest for most of the piece. To work through this, do some self reflection: while performing, what part of your embouchure feels tense? Where in the Partita does tension arise? What happens directly before and after the tension begins? After you’ve determined the source(s) of tension (such as physical fatigue, articulation issues, stress, unsuitable headjoint position, etc) consult a flute teacher to find exercises that take care of the problem. These exercises might be for double tonguing, flexible embouchure, endurance focused etudes, etc. In any case, increasing your awareness is key for eventually learning to relax the embouchure during intense pieces like the Partita.

It is important to give listeners musical space in a dense piece like the Partita, and this “musical space” can also provide a solution to embouchure tension. Providing space means more than just taking a quick breath when necessary; instead, slow down and take a little time to denote important cadences – this also gives audiences a brief rest.

Adding musical space in a given movement of the Partita is both stylistically appropriate and musically expressive. Taking the Corrente as an example, some places where you can take a bit of musical space are in measures 4, 10, and 17, as well as in measure 22 after the third beat. Other choices for musical space are between measures 30 and 31, 35 and 36, as well as in measure 50. Performing the piece with space in these measures will help listeners understand the important moments of the work and the movement’s structure.

In addition, you can make your performance stand out with deliberate dynamic choices. While flutists of the Baroque era were somewhat limited dynamically by the capabilities of the traverso, modern flutists are free to make dynamic choices based on musical and stylistic aims. In the final phrase of the Sarabande, flutists can employ a wide variety of dynamic schemes, such as performing measures 43 and 44 loudly while decreasing the volume and energy for the final two bars, or by performing from 43 to the end with a strong dynamic throughout. One of the best things about performing the Partita is that dynamic choices will vary, so as long as you create a dynamic scheme that is stylistically appropriate for Baroque era music, you will advance towards creating a convincing interpretation of the work.

When it is time for you to perform the Partita, it is especially important that you don’t give in to nerves and play the piece on autopilot. Instead, interact with the music and bring your beautiful musical ideas to life without hesitation, and you can create an unforgettable performance that will charm audiences and flutists alike.

Holly Venkitaswaran is an American flutist studying with Molly Barth at Vanderbilt University. From January to May 2022, she lived in Vienna, where she studied with Stephan Tomaschitz, principal flute of the Wiener Symphoniker.

Her other notable performances include solo recitals on Wisconsin Public Radio and WFMT’s radio show “Introductions” in 2019. She has also performed in masterclasses for Stefán Ragnar Höskuldsson, Lorna McGhee, Jim Walker, Marina Piccinini, Bonita Boyd, and Amy Porter, among others. Holly plays a 14 karat rose gold flute made by Juan Arista, one of the last of its kind to be made by the master flute maker.