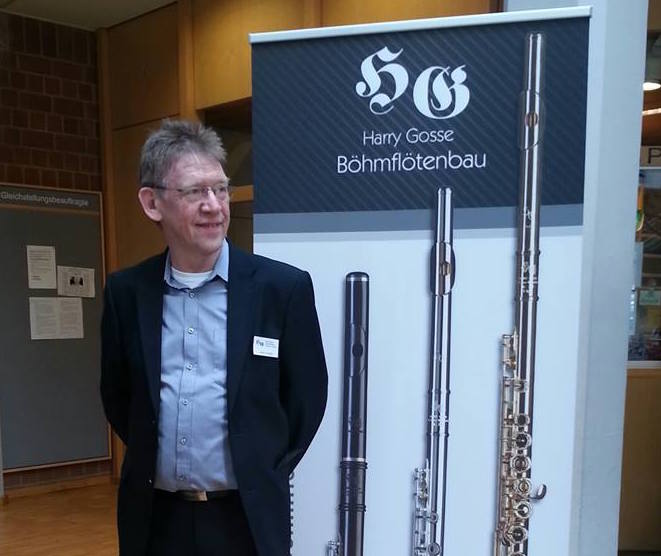 Harry Gosse, proprietor of Harry Gosse Böhmflötenbau, founded in 1989, is a maker of artisan handmade flutes in the Black Forest of Germany. In my visit to Gosse, I learned about his unique vision for crafting wooden and metal flutes, the attention to detail and craftsmanship that goes into each of the flutes, and Gosse’s training with the legendary flute maker Johannes Hammig.

The Wooden Flute with Chimneys:
What immediately caught my eye about the wooden Gosse flute is the presence of a chimney on each of the tone holes. These tone hole chimneys are shorter than on the metal flutes but they are there, and appear as if they rise seamlessly out of the wooden tube. Gosse explains that the chimney is constructed by leaving a portion of the wood around the tone hole when whittling down the wood to form the tubular body of the flute. Likewise, I noticed that the Gosse wooden flutes have a raised lip plate, which mimics the lip plate on a metal flute.

This too is constructed by leaving the wood for the raised lip plate when removing excess wood to reveal the headjoint tube. Simply put, each part of the Gosse wooden flute is made from one continuous piece of wood. While there are other flute makers who make wooden Böhm flutes, which are like metal flutes except the tubing is constructed from wood (as opposed to the single key traverso), he is currently the only maker who offers wooden flutes with wooden tone hole chimneys and lip plate constructed from one single piece of the wood.

Such construction, as opposed to forming the tone holes and the lip plate/riser from a different piece of wood and “implanting” them onto a wooden body made from a separate piece of wood, allows Gosse flutes to maintain the acoustic integrity of the flute resonance. Gosse believes that this style of constructing wooden flutes heightens the responsiveness of the flute more than if it were constructed otherwise.

Not a Relic of the Past:
My experience with the Gosse wooden flutes (you can hear me play them at the ends of videos Part I and Part II) is that they are indeed responsive. The headjoint speaks easily, and the tone rises out of the wooden flute with less effort from the player than is required with a metal flute. It is just as easy to play clear, fast detaché notes on the wooden headjoints as on the metal. The mechanism is smooth and responds quickly to a light touch. The tone is rich and beautiful, in a velvety, luscious, creamy way.

The tone color can be changed by changing the type of wood from which the headjoint is made. I found the a brown-colored wooden headjoint to produce a very sparkling, shimmery color that evokes the brilliance of a silver flute, while maintaining that distinct je ne sais quoi richness of the wood. The rosewood headjoint played with a color of candle-light warmth.
Another headjoint (it was made from the same African Blackwood as the body and the footjoints) allowed me to produce a dense, enormous sound, inspiring me to play in a sonorous, virtuosic piena voce style and tone. Yet another headjoint invited me to play in a nostalgic tone reminiscent of the Baroque traverso but with the virtuosic capabilities of the metal Böhm flutes. This taught me that wooden flues are not relics of the past but fully capable of taking us into the future. Choosing to play the wooden flute is like choosing a gold flute or platinum flute or silver flute: the choice of material shapes the basic tone color of the flute.

To Draw or Not to Draw:
As for the metal flutes, I was intrigued to see the difference in the construction method between those with drawn and those with soldered tone holes: both flutes start their genesis on the same machine that drills the initial holes. The only difference is that the soldered tone holes start with drilling small circular holes, while the drawn tone holes start off as larger, elliptical holes. From this point forward, the two types of flutes travel different paths until the tubes are ready to be crowned with the mechanism.

I took this opportunity to ask Harry Gosse about the difference between soldered tone holes and drawn tone holes. Gosse finds that flutes with soldered tone holes are more responsive, and play with a bigger sound than those with drawn tone holes. He also told me that the type of metal one uses to “glue” the tone hole chimneys onto the tube can make a difference. He uses a metal that will vibrate better than tin, which is a more commonly used metal when soldering the tone holes onto the body. My personal understanding as to what creates the difference between soldered and drawn tone hole flutes is that there is more metal on the soldered tone hole flutes, which means there is more material that can vibrate, which equals a bigger sound. Furthermore, my understanding is that the drawn tone holes are made by pulling metal way from the body (as opposed to adding additional metal), which thins out the metal of the tube at various intervals, which disrupts the flow of the tube’s vibration.

The Truth Lies in the Details:
I find myself thinking of the Gosse wooden flute that is constructed from one single piece of wood. While it looks similar to the drawn tone hole flute, which is also constructed from a single piece of metal, it is different in that the thickness of the wood tubing remains undisrupted, since both the tone holes and the tube are formed by carving away excess wood to reveal a complete flute tube with tone holes. Harry Gosse clearly thinks about the optimal way of constructing each type of flute to maximize its capabilities.

When asked about his apprenticeship with Johannes Hammig (who is known as one of the great master flute makers of his time), Gosse immediately recounted an anecdote about his early days in creating a headjoint. What I understood from Gosse’s story is that Hammig was a meticulous man, and would not allow anything less than perfection to pass under his watchful eyes. I felt a similar commitment to detail from Harry Gosse, who also has the artistic abilities to design all the flute parts, the mechanical know-how to construct them, and the curiosity of a scientist in seeking out the optimal way of constructing the best flutes for the flutists of the world.

Gosse Flutes:
Gosse flutes are all handmade, with pinless mechanism. They are available in 935 silver with 0.42mm wall thickness in DN model (drawn tone holes) and SR model (soldered tone holes); gold flutes in DN and SR models in 9K (0.38mm wall thickness), 14K (0.36 wall thickness),
and 18K (75% gold content, 0.34mm thickness); and wooden flutes (thin walled). Headjoints are available in wood, silver, gold, or gold-plated. The wooden headjoints are made with an interchangeable joint tenon that allows it to fit perfectly to any flute. Gosse flutes and headjoints can be custom made to order.

Ai is fascinated by all things beautiful and creative, including the lives of people and their thoughts. The flute is Ai’s ticket to the grand tour of the world—a ticket that unlocks gates, doors, and windows to places and hearts. Beauty, creativity, passion, wisdom, truth and courage are the landmarks that capture her attention the most. Ai joins the team at The Flute Examiner to share the souvenirs she finds on her grand tour with each reader.

The flute brings Ai invitations to perform as a solo and chamber music artist internationally, including the British Flute Society Convention, Canadian Flute Convention, and by the Hake-no-michi Society/Primavera String Quartet in Tokyo, Japan. In the United States, she is invited as a guest artist at events (such as the Flute Day at University of Nevada, Reno), and presents recitals at festivals and universities (including the NFA Conventions, University of California Davis, and Middle Tennessee State University).