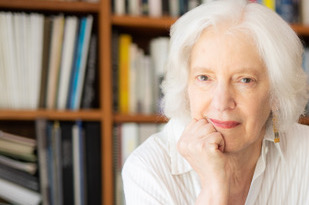 Tell us about your background. What called you to a life in music?

My background would never have predicted a life in music! My parents were both in medical fields: my father was a clinical psychologist, and my mother received her PhD in medical bacteriology. It so happened that when I was five, and we were living in Albany, NY,  my father was working with members of the Musician’s Emergency Fund. They suggested that he get a piano for his daughters. He did and it was love at first sound! My father asked if I wanted lessons. Of course I did!  Then, when we moved to Westfield, NJ several years later, I found a piano teacher who also ran weekly classes in music theory. This dramatically helped my musical understanding.  I also had a wonderful flute teacher. Although I had interests in many other areas, music quickly became the through-line of my life. My engagement with electronic music also stems back to my early years – as a junior in high school I wrote to the Columbia-Princeton electronic studio, asking if they offered courses, internships or jobs!

When I attended Douglass College as a music major, I had the good fortune to study with composer Robert Moevs. After working with him, I decided I would like to give a senior composition recital instead of the required piano recital. By dint of stubborn persistence, I was eventually given permission, as long as I performed one of my own pieces, found performers for the other pieces, organized the rehearsals and managed the concert. It was the first such recital in the history of the college and launched me on my path. It led me to further study, completing my MM at Juilliard and my PhD at Princeton before joining the faculty at the University of Virginia, where I founded the Virginia Center for Computer Music in 1987-88 and worked to combine acoustic and digital options for our students.

You have written extensively for the flute. What draws you to this instrument, and what are the challenges and joys of writing for the flute?

I was introduced to the flute in public school and played in school orchestras in middle and high school. When I decided to focus on composition I developed a fascination with its  expressive range.  I kept my flute and experimented with it. I became convinced that it had a wider range than commonly thought. I took it as a challenge to compose both for the singing flute and the wild flute in pieces ranging from the pastoral Coursing Through the Still Green to Kairos, for amplified flute and interactive electronics. I also must mention flutist Patricia Spencer, who was a fantastic collaborator in the explorations for Kairos and recorded it and several other of my flute piece on her CD Narcissus and Kairos.

In  Ruah, my concerto for flute and chamber orchestra, I drew upon both traditional and extended techinques.  The flute has become a nexus for experimentation and evolution and I know this will continue.  I always experience joy when I compose for the flute – I love its many tones of voice and endless colors.

What inspires you, as a composer? Reading about your works, I see several that illuminate stories of injustice and human rights, things that our society should neither ignore nor forget.

My inspirations come from many sources. But it’s true that I have increasingly created music that responds to current events and social issues. One example is Ice Becomes Water, for string ensemble and electronics fashioned from glacier recordings. Commissioned by the San Jose Chamber Orchestra and their intrepid conductor Barbara Day Turner, the piece is a direct response to the stunning retreat of glaciers and the terrifying relationship of this phenomenon to climate change.

Another example reflects my response to the ways in which history and literature so often downplay the role of women. Penelope’s Song is my response to this situation in the Odyssey. It focuses on the exploits of Ulysses, and pays scant attention to his queen, Penelope, who is stuck at home during his two-decade absence. To keep greedy suitors at bay, she declared that she would not take any of them until she finished weaving the shroud for her father-in-law. But at night she unravelled what she wove by day, never finishing the garment.  I imagined the weaving and unweaving and expressed it through the intertwining lines and the warp and woof of the acoustic and electronic elements. Penelope’s Song,  in the version for amplified flute and electronics, was recorded by new music champion and ace collaborator Lindsey Goodman on her CD Reach Through the Sky.

Some pieces, however, are of a more spiritual bent, such as Ruah for flute and chamber orchestra. Ruah is the Hebrew word for spirit, and in Cabalistic mysticism refers to the nexus between the body and the soul. Renee Siebert and the Prism Chamber Orchestra recorded this on Piping the Earth, a portrait disc of my orchestral music now available from Ravello. It was most recently performed by Mehrdad Gholami conducted by Timothy Weiss with the Aspen Contemporary Players at the Aspen Music Festival.

Tell us about the commission process. How much of what happens is dictated by the commissioner, and how much is free for you to interpret?

The commission process is varied. I always want to find a way to connect with the commissioner in a collaborative process. For instance, when the Amsterdam-based Hexagon Ensemble wanted to commission a piece, I thought about the wonderful Franco-Flemish Renaissance composers and in discussions with the ensemble I suggested basing my piece on elements of Ockeghem’s Prolation Mass. The result was Ockeghem Variations for wind quintet and piano. They premiered it at the Concertgebouw and later recorded it on their Dutch Connection CD.

Talk to us about extended techniques and their role in your flute music. What do they add and enable in the texture of the music?

I am fascinated by the timbral world of every instrument, including traditional and extended techniques. I love experimenting with performers who are themselves curious about the expanded reaches of their instruments. Such experimentation broadens the range of available textures. This in turn affects both for structural design and emotional power. In my flute music, I have developed singing techniques using the trill keys and worked with a variety of microtonal inflections as well as multiphonics and overblowing techniques.

What is “The American Flute,” and how did it come about?

The American Flute is a volume of pieces created to introduce high school and college flutists to contemporary flute music. Composer Timothy Vincent Clarke and I were attending a National Flute Association Conference in Kansas City, where Renée and Cynthia Siebert premiered the flute/piano version of my concerto Ruah. We were on a panel with composer Christopher Rouse and during the discussion, numerous flutists complained that there was no volume of flute music to introduce high school and college students to new repertoire. So, we decided to do something about it. We contacted several terrific composers and the resultant volume, distributed by Subito Music, includes pieces by Ann Callaway, Joseph Koykkar, David McBride and Mark Winges as well as Timothy and me.

How would you advise a young person who is interested in developing skill as a composer? Where is a good place to get started?

As composer Vincent Persichetti once told me while I was a student at Juilliard, his advice to budding composers was, “Compose!” To develop skills as a composer, create pieces for yourself, for friends, for anyone in your circle. If you can go to a program such as The Walden School, that’s terrific. But if not, try building a music community in your local school and see if any of the ensembles are open to trying music by students once you have made some progress.

When you think about the direction of classical music in the 21st century, what do you see?

I see massive ferment. Classical music has unfortunately come under attack by some who have tried to tar it as music interest only for ‘elites.’ Others have stoked anger towards European classical music because of the societal structures that produced it. That’s such a shame! Although we may deplore societal circumstances that give rise to some art, this is not a reason to discredit the fruit of artists’ imaginations. Nonetheless, contemporary classical music has entered an exciting period, with the voices of more women and people of color finally being heard in classical programming as well as more contemporary music in general. It is still not enough, but at least there is movement.

It’s strange – when I first came across classical music, in PS 16 in Albany, I loved it. No one told me that it was ‘good’ for me, it was just a spontaneous reaction. Creating opportunities for young people to experience classical music is likely to lead to their engagement with it. Even more important is providing opportunities to learn instruments, so they may experience the pleasure of music-making. Many organizations are making efforts to provide such experiences, with outreach and school performances. For classical music to continue to maintain a place in our culture, such efforts must be redoubled.

This is not to deprecate popular music – it is flowering, fueled by new technologies as well as distribution channels. I started a songwriting course at the University of Virginia because I thought it was important for students to have the opportunity to learn about brilliant songwriting from the blues to hip hop and learn to express themselves in these genres.  Pop music has contributed much to the development of technologies that continue to transform music. They gave the initial push to create MIDI, allowing synthesizers to communicate with each other, and developed a multitude of production techniques. Composers of contemporary classical music have contributed as well, with the development of computer music and electroacoustic practices. Influences continue to move in both directions.

In the future, I see more cross-pollination between classical and popular music. My hope is for a future that offers opportunities to experience the delights of both traditional classical music and its contemporary variants as well as the full range of popular music.

For a complete discography, visit www.judithshatin.com

“…highly inventive music on every level: hugely enjoyable and deeply involving, with a constant sense of surprise.” – The Washington Post

Composer Judith Shatin is renowned for her acoustic, electroacoustic and digital music. Called “highly inventive on every level” by the Washington Post, her music combines an adventurous approach to timbre with dynamic narrative design. Described as “powerful and distinctive” by Fanfare and “both engaging and splendidly controlled” by the San Francisco Chronicle, her music includes chamber, choral and orchestral; electronic to electroacoustic and multimedia. An innovator, she often combines acoustic and electronic media, as in Ice Becomes Water (string orchestra and electronics fashioned from glacier field recordings). Her imagination is sparked by her multiple fascinations with literature and the visual arts, with the sounding world, both natural and built; and with the social and communicative power of music. Her music is recorded on more than 30 albums, with more in the pipeline! Shatin is William R. Kenan Jr. Professor Emerita at the University of Virginia, where she founded the Virginia Center for Computer Music and led the program to national prominence.